Finally caught up with the Fringe season-ender over the weekend and was very happy with it. Fringe has gone from being an X-Files clone to being a top-notch sci-fi genre piece with a great core idea. I don't know who deserve the credit for this transformation. I wouldn't be surprised if the show's direction firmed up once J.J. Abrams moved on--Abrams is great at building mythology (and lots of other things) but he's not at his best when it comes to thematic coherence and narrative drive.

In particular, I was kind of blown away by how elegant the writing was in the Thomas Yatsuko-penned "White Tulip" (ep. 2.18). I couldn't think of a genre-piece that slow-played its hand so well, had such a pained, beautiful antagonist--and simultaneously did serious heavy-lifting for character motivations in the larger series.

The season ending episode "Over There pt 2" (2.23) was written by the crazy over-rated Akiva Goldsman wasn't as sublime, but it did one thing exceptionally well. By positing that it was Walter Bishop himself who asked Bell to cut out parts of his brain, Goldsman (1) Explains a central riddle of the series; (2) Resolves the relationship between Bell and Bishop; (3) Backfills the motivation for pre-series Walter and explains how this daffy, but sweet, man could have done and created such horrible things; (4) Creates all sorts of space for Earth 2 Walter to be the heavy. All of that with about 8 lines of dialogue. Very nice stuff.

There was also a wonderful Easter egg in Peter's apartment on Earth 2: The framed Earth 2 comic book covers on the wall. There's a post about them here. Not only are they kind of delightful, but it's gratifying that they used DC books, since Fringe owes it's multiverse to DC. (And also gratifying that they included a Crisis on Infinite Earths cover.) 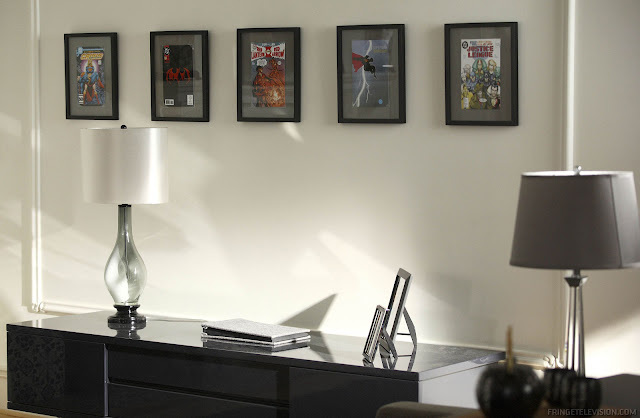 The only slight complaint is about the Justice League alt cover. Note that Jonah Hex has been substituted for Green Lantern. Why? Hex doesn't exist at all within the mythological (or chronological) confines of the JLA books. No, it's there as a self-serving hiccup from Goldsman, who wrote the up-coming Jonah Hex adaptation flop, which promises to be one of the worst (and most underperforming) comic book film adaptations yet.
Posted by Jonathan V. Last at 10:38 AM

White Tulip was the finest hour of television I've watched this year. I include in that evaluation sporting events such as the Saints upset of the Colts and the Celtics last six victories. Just magnificent writing, unhurried in its execution, and absolutely emotionally satisfying.

Jonah Hex is not part of the JLA in our universe. However, neither side in Fringe is our universe, with "the other side" being so far as we can see more divergent.

Superman Vs. Batman, the movie. Best detail of the alt-universe, totally awesome.