The dream, of course, is to own a comic shop. The problem, or rather the main problem, is that there isn't a ton of money in owning a comic shop.

But Newsarama has a piece by the owner of A Comic Shop in Orlando explaining some of the things he's done right in making his business a success. He does some gonzo marketing and whatnot. But his stroke of genius is so obvious I can't believe no one else ever thought of it: 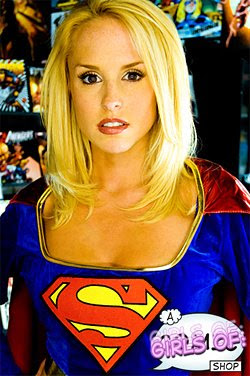 It's like printing money.
Posted by Jonathan V. Last at 11:20 AM

Z.E.D. stands for Zombie Emergency Defense. It spawned from my love of The Walking Dead and my desire to connect non-comic fans to what I feel is the best zombie story ever. We train people to defend themselves against a zombie apocalypse and survive the desolate world left behind. From the start this program sparked huge interest, and the program evolved into its own entity with its own manager. We’ve rented out a local gun range for firearms training against custom zombie targets. We also run missions at a local laser combat gaming facility, complete with zombie actors wearing sensors on their heads.

I've always said I'd support your dreams. But I draw the line when you ask me to dress up like Wonder Woman.

Supergirl? Yeah, sure, I guess I'd do that.

(That chick looks vaguely like Kristen Bell, doesn't she? But ever so slightly less clever.)

I think the secret to making money in a comic shop is to stock all sorts of ancillary geek paraphernalia: RPGs, action figures, maybe even some DVDs or sci-fi/fantasy series books. That way, you can lure your subscription customers (where you're making your money anyway) into making some high-margin impulse purchases.

The main necessity: Good HVAC. Otherwise you get (what I've called in conjunction with RPG stores) that Gamer Stank.