Michael Vick: All Is Forgiven

By now I assume you've all seen this: 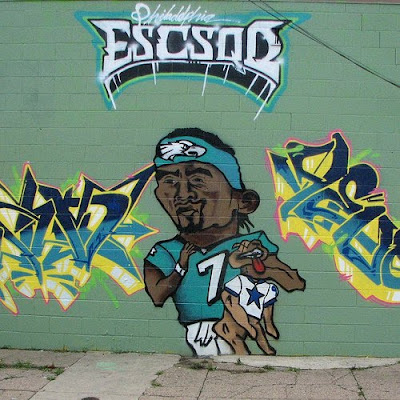 People in Philly (or at least, a large segment of the population) have embraced Vick in a way not entirely unlike how people in D.C. clung to Marion Barry after his crack bust. Some of you might object, but I'd point out that it's just part of our culture and you probably can't understand it. (By "it" I mean embracing a neer-do-well athlete for unclear reasons even though they are almost certain to cause the team grief down the road. Get your mind out of the dungeon.)

On this last score, the WaPo's Dan Levy has the definitive analysis:

There will be a quarterback controversy by the end of the season. . . .

Philly loves the backup quarterback, and it might come from the fact that they've never been all that happy with the starting quarterback. Randall Cunningham had such a tumultuous relationship with the fans, he wore a hat that said "Let me be me" while sitting on the sidelines. . . .

Vick did do enough last night to whet the appetite of every Eagles fan looking for a championship. Vick, or at least the idea of Vick, is everything fans want in Donovan McNabb. A few years back, McNabb decided he wanted to focus on being a pocket passer, basically deciding that running is for suckers. Some thought it was a shrewd decision to lengthen his career. Some in Philadelphia thought it was a decision to 'conform' to the NFL model of a quarterback. In other words, McNabb was getting too white for some people in town.

While McNabb has remained elusive, including a few times last night adeptly escaping pressure, he's not the tuck-and-run quarterback we knew in his first few seasons. Or what we knew of Vick before he went to prison. So for some, Vick is everything McNabb used to be, and more.

Those sentiments came up this week when J. Whyatt Mondesire, head of the Philadelphia NAACP was promoting a rally to support Vick at last night's game. The 'rally' completely fell short, according to reports. But not lost on people was the fact that Mondesire famously wrote a slam-job piece on McNabb (in essence making all the claims stated above) and now seems to be defending Vick. Could this be a theme echoed throughout the city, you know, after this whole dogfighting thing gets old to talk about?

Last night's 'rally' may have been more about the black community galvanizing behind Vick instead of McNabb than it was protecting Vick's right to earn a living from those few animal-rights protesters who showed up to voice their opposition to the signing. If the community turns on McNabb and puts its energy behind Vick -- and I'm not suggesting it has, yet -- could the locker room be far behind? . . .

Now reports are coming out that McNabb was unhappy with the flow of the offense because of Vick's involvement in the gameplan. And it's just the pre-season. If the Eagles get off to a 5-0 start, which is quite possible, there will be high-fiving on the sidelines. But if the Birds falter a few times in their first five games, there will be a clamoring for Vick to take the reigns in week seven. On Monday Night. In Washington.