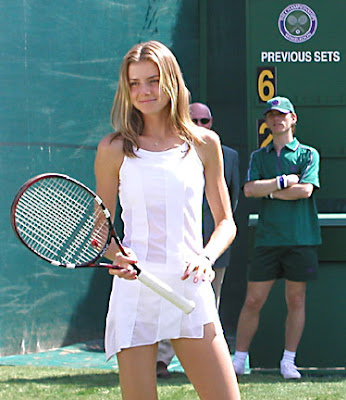 Sad news all around from the Open yesterday. First, Daniela Hotchukova got sent home in the first round. Second, Maria Sharapova began what will be an inevitable march to the finals because she's playing nobody between now and then. Let's get this straight: There are five women with a good chance to win the Open. The top four of them (Venus, Serena, Henin, Ivanovic) are all on one side of the draw. Just how much money did Canon drop off at the USTA's offices to make sure that it was the #1 seed, Justine Henin, who has to battle through Serena and then either Venus or Ivanovic to just to reach the finals. The USTA even hid Jelena Jankovic on her side of the draw, just to make sure Sharapova didn't have to see her. It's kind of disgraceful.

The other sad news was that Justin Gimelstob played his final Open singles match last night, losing in very competitive, high-quality, straight sets to Roddick. This may not mean much to you, but Gimelstob was the last small connection from my high school days to professional sports.

My alma mater, Moorestown High, was something of a tennis powerhouse in the early '90s. Our big stud was a guy named Mike Sell. Sell was a fun kid--I sat next to him in computer lab for a semester--and the best athlete I've ever seen close up. He could do anything. He was probably the best basketball player in school, ditto soccer. He probably could have been the #1 runner on the cross country team and a high-level 800 runner, too. He was legendary at ping-pong.

Also, he was the best tennis player in the state by a mile. Mike went to the University of Georgia where, if memory serves, he lead them to a national championship. He went pro eventually and was ranked as high as somewhere in the vicinity of #133 in the world. Last I had heard, he had retired and was doing some coaching, first of Monica Seles and then with the USTA.

Anyway, Sell was ahead of me in school and shortly after he graduated, Gimelstob emerged on the NJ tennis scene being billed as "the next Mike Sell." All of us who were Sell partisans looked at him with some sourness because of this, but he became a dominant high school player, a fine college player, and a good pro, finding his way into the third round of a few majors. A big guy with soft hands, he played great serve-and-volley tennis and gave great interview. Tennis players are not the brightest subset of athletes; Gimelstob is a smart, articulate, charming guy.

Now that he's stepping away from the game, none of my contemporaries who I knew of in high school are left in professional sports. And I'm feeling pretty old.
Posted by Jonathan V. Last at 6:54 AM