Below is the image for the one-sheet: 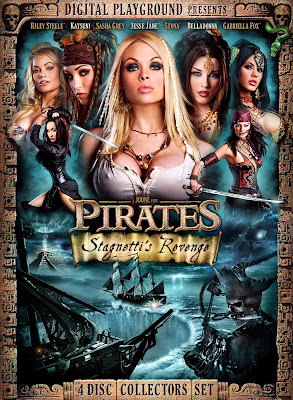 Pretty wild, huh? Like they actually paid a graphic designer. But the real gold is in the email release. Some highlights for your reading pleasure:

July 23, 2008 --- VAN NUYS, Calif. --- The cover art for Digital Playground’s epic sequel “Pirates II: Stagnetti’s Revenge” is now available, as well as juicy facts concerning the budget, the special effects, and the raw, passionate sex. The original “Pirates” made history as the most expensive adult film ever produced, but it is left in the shadow of “Pirates II” and its 10 times larger budget. The extra cost can be partly attributed to the over 600 astounding special effects. . . .

Digital Playground’s newest signed contract girl is Riley Steele and “Pirates II” contains her first filmed sex scene ever. Riley says, “What a fabulous film to start my career with. The original ‘Pirates’ was partly responsible for my decision to enter the industry. As if just being in the film wasn’t enough, what was supposed to be my first boy/girl scene turned out to be so much more."

There's so much great stuff here, but my favorite part is the way the press release demurely edits out the "We all wanted to [have sex]."
Posted by Jonathan V. Last at 6:09 PM

"4 disk collector set"? What the heck are they including besides the movie itself?

As for the 4 discs, I assume there are copious deleted scenes.

If the original Pirates is any indication, this should be a pretty decent film.