* Yes, the Phelps kid is a physical specimen and in very good shape and whatnot. But the French 100M free stud, Alain Bernard, is the scariest dude on the planet. He's not a Frenchman so much as a Gaul--he reminds you why they were a feared people several centuries back. Here, have a look: 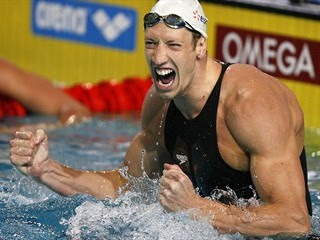 Vince McMahon (or Freddy Prinze Jr.) should sign him up for the WWE tomorrow. He'd be the greatest heel since the Nature Boy.

Let that sink in for a minute.

I love Blake. A lot. But he's a head-case with a terrible record against top players. He survives by beating the people he should beat but never, ever overachieving. He was 0-8 against Federer before today.

Blake played a pretty good match, but Federer looked terrible. As he has all year long, there were frame balls and mis-hits. At times he looked alternately frustrated, scared, and sad. His run as the greatest player of all-time is over, more suddenly and decisively than anyone ever could have imagined. The other players know it. None of them fear him anymore. Where they used to fear a match with Federer, they now look at it as a golden opportunity to get a big win over player who's vastly over-ranked. Drawing Federer is now like winning the lottery.

And the worst, most tragic aspect of all of this, is that Federer seems to understand all of this.

I'm more and more convinced that he'll never win another Slam. I now believe that it's possible (albeit unlikely) that he'll retire at the end of this season.

Galley Friend R.M. posits that what Federer should really do is retire from singles and commit himself totally to doubles, as an act of generosity to the sport. It would instantly create an audience for doubles, which is criminally underappreciated.

* Is it possible not to root for Misty May-Trainor and Kerri Walsh? I dare you to try.

I'm as averse to pre-packaged hype machines as anyone on the planet. But I've also been following beach volleyball since Karch Kiraly was still on the hardwood. I remember the halcyon Randy Stoklos-Sinjin Smith days. (Belmar AVP represent!) And May and Walsh are the real deal. Unlike Gaby Reese, they're really fun to watch, not just to look at. Here's hoping they get gold.
Posted by Jonathan V. Last at 8:41 PM

Ben said...
This comment has been removed by the author.
7:32 AM

May and Walsh are great, but still have a long ways to go to attain the greatness achieved by Monroe Clark and Zach Barnes. Those guys were unstoppable!

If I could just to Mr. RM regarding Federer: Toldya so.

Are you sure his shoulders weren't photoshopped?