Saw it last night. Thoughts, in no particular order:

(1) Overall, the movie is a mess. A glorious, amazing mess. I don't think I could recapitulate the plot for you because it made almost no sense. Enormous chunks of the story are either preposterous, contradictory, or completely unnecessary. Of the three main groups of humans the story follows, you could have cut one of them out entirely (the plucky NSA analysts) and missed absolutely nothing.

Many of the action sequences are basically incomprehensible. Also, the dialogue is laughable more often than not. And Michael Bay has grounded the movie so deeply in the present--jokes about Armageddon, references to eBay--that there is little chance of it holding up a decade from now the way, say, Jurassic Park does.

(2) All of that said, I spent the entire 144 minutes basically in the same state Sean William Scott is in here, after Frank the Tank tranqs himself (at the 1:43 mark):

In short, I haven't been this emotionally, physically, and spiritually satisfied by a summer movie in a very long while.

(3) Why? Well, there's the visceral thrill of seeing Optimus Prime--even an Optimus Prime with flames--transforming for the first time. But most of the movie's charms defy explanation. Either you'll be delighted by giant robots fighting in the street and turning into cars, planes, helicopters, and tanks, or you won't.

(4) However, even if you don't dig Transformers, there's much to appreciate. For one thing, Transformers serves as a giant advertisement for the F-22. For another, it's very satisfying to know that while Decepticons are awesome killing machines, the main cannon on an A-10 shreds them like hot BB's through a stick of butter.

And then there's this: Transformers is the first movie I've ever seen to show a Spectre Gunship in action. If that doesn't make it move, you might already be dead. 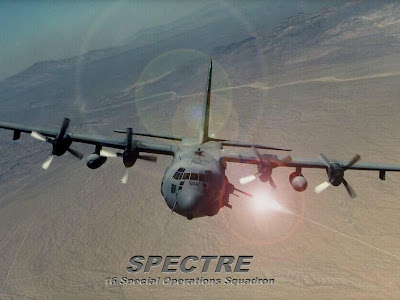 (5) While I loved Transformers, in Japan this movie might just be Citizen Kane.

* The Decepticon side of their home planet looks suspiciously like post-betrayal Isengard.

* In a triumph of product placement, this movie made me really, really want the new Camaro. True story.

* There are so many bit parts filled by Law & Order veterans that I found myself almost a distracted by them. For instance, the fellow who played Anthony Anderson's brother was also the victim on the SVU episode in which Anderson appeared as a detective.

* John Turturro's slightly gonzo MIB routine is totally out of place and yet highly amusing.

Update: Now that I have some distance, it occurs to me that Transformers is actually important in that it does something that's never been done before--it is not just critic-proof, it is judgment proof. Michael Bay has created a work which simply cannot be held to any sort of standard: artistic, logical, moral, critical. He has made a movie which simply is. This is the Holy Grail of modern moviemaking, I think. It's Hollywood's version of a perpetual motion machine.

AICN's Vern tries valiantly to hold Transformers to some objective standard, but in the end I think he fails:

[Bay] is obsessed with sports cars and has never felt a human emotion, how could you do better than hiring him to make a huge expensive movie where the main characters are cars? It's like God made up The Transformers just to get some use out of Michael Bay.

But Michael Bay told God to fuck off, and he went and made a movie about people. After that opening attack you get literally an hour of kiddie movie horse shit about Shia LeBeouf being a nerd and trying to hit on the adult car mechanic Maxim cover girl with a troubled past from his high school.

Man, now all Flava needs is the Iggles to win a Super Bowl and he can die happy.

I gotta say, I was never into the Transformers (too old, I suspect, as I had a Shōgun Warrior toy), but your mentions of the F-22, A-10, and Spectre intrigue me. Three of my favorite platforms. I'd love to see an accurate reproduction of what it's like being on the ground taking fire from a Spectre. Freaking terrifying...

I saw the movie yesterday with my parents and my kids. We all enjoyed it and I pretty much agree with your assessment.

Later in the day, as we were grilling (4th of July of course), my dad gave me an earful on the C130 gunship. He said that when he worked at Texas Instruments (late 60's to late 70's) he did some work on the computer systems. It's always fun hearing my kids go on after a movie like this, but my dad was even more fun.

I'm so torn between the new Camaro and the new Dodge Challenger...

...I'm still leaning toward the Challenger, white with Colorado plates, if you know what I mean.

All I know is that the cops better be ready for some Denver to San Fran runs after that car is released.

"Enormous chunks of the story are either preposterous, contradictory, or completely unnecessary"

And that's setting aside the basic premise that we're dealing with transforming robots.

It's like the time my grandfather stormed out of the last scenes of ET, mutting, "oh this is UNBELIEVABLE."