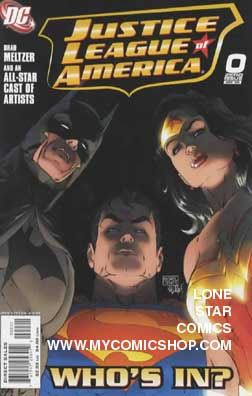 Last year Brad Meltzer, the guy who got me back into comic books with his outrageously good Identity Crisis, rebooted DC's Justice League of America series. Like Identity Crisis, it was jaw-droppingly good. The stories were interesting and the characters were written more intelligently than you have any right to expect in a comic book. One of the plots, for instance, dealt with Solomon Grundy who, it turns out, fears death, even though he knows he will be reincarnated every time. Couldn't ask for better stuff.

Now Meltzer has left Justice League and been replaced by a writer named Swayne McDuffie. I'd come across McDuffie's work only once before with his malicious, anti-American contribution to a 9/11 comics anthology. But his new Justice League is even worse: In a single issue he tears down all of Meltzer's structure and turns the book into Super Friends. All of a sudden the League lives in the Hall of Justice. Lex Luthor (in the stupid Super Power green armor) assembles the League of Injustice. They have Hall of Doom headquarters--looks exactly like the one the Legion of Doom used in the animated series--which is concealed underneath the water in a swamp.

Awesome. Brad Meltzer made me remember why I loved comics. McDuffie reminds me of why I left them.
Posted by Jonathan V. Last at 9:49 AM

did this tool bring back Firestorm and Cyborg?