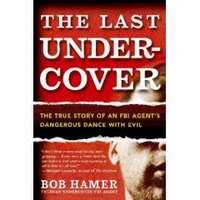 A few years ago, totally by chance, I befriended a fellow named Bob Hamer. Hamer was career FBI, a long-time special agent at the Bureau (from the days when crime was more important than terrorism), who specialized in undercover work.

But Hamer wasn't just your garden-variety undercover (if there is such a thing): He was a serious stud, and something of a legend in the Bureau. He infiltrated the Mexican mafia, the Russian mafia. One of his great accomplishments was the years-long infiltration of NAMBLA, the somewhat famous gay pedophile group. Among other accolades, Hamer was given the Director's Award for Special Service, an honor which they don't hand out every day at the Hoover Building.

All of this is wind-up to explain that Bob Hamer is a real American hero. And now that he's retired, he's written a book about some of his exploits. Called The Last Undercover, it's a fantastic piece of work and I can't recommend it highly enough.

The only bad news is that it won't hit stores until September. In the meantime, you can visit Hamer's website, which has some sample chapters and other goodies. But I just wanted to put The Last Undercover on your radar because it, like its author, is the real deal.
Posted by Jonathan V. Last at 9:31 AM