Of Comic Books and Cheesecake

There seems to be some agitation over a new Marvel statue of Mary Jane, pictured below. 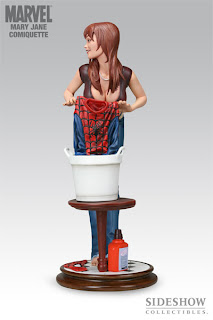 It's unclear to me if people are bothered because M.J. is washing Spidey's costume or because she looks like she's on loan from the WWE's "Diva" squad. That said, there's a long, proud history of comic book cheesecake, much of which has even made its way into the comic statuette business as of late. Check out, for instance, this insane recent Supergirl: 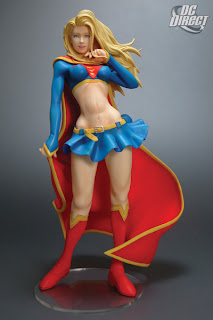 Frankly, I'm surprised she's not depicted here fighting off an attack from some randy tentacles. But the most ludicrous serving of cheesecake in recent years has been DC's continuing fetishization of Power Girl, who has become something like a combination of Wonder Woman and 1995-era Pam Anderson.

Anyway, no matter how advanced and sophisticated comic books get, one suspects that they will never completely outgrow their pin-up roots. So if M.J. is getting the same treatment as the super-heroines, then I suppose there's no harm in it.
Posted by Jonathan V. Last at 10:46 AM

When comic book guys cry how popular culture stereotypes them, we just have to point to those statues.

I would guess that it is more about the role MJ is playing than her physical portrayal. As you point out, those who complain about the cheesecake aspects have a lot to pick from, but the superhotties actually fly around and do stuff, not sit at home with Tide at the ready for their SSO.

Finally, you would think that a high-tech suit that absorbs a lot of rough use would be machine-washable, but that obviously makes for a collectible statuette that a) is far less interesting to the comic book milieu and b) would not fit on its tiny base.

"an attack from some randy tentacles"

I could have sworn that read "testicles".

Then I thought about "Better Off Dead" when the French girl mixed up those words...

The cover of the new Buffy Season Eight comic struck me as cheesecake.

I thought it was just me. As a kid, I had serial crushes on animated characters. Probl'y good that I never got into Anime...

The Mary Jane one is chauvinistic and dumb I agree, but I don;t see what's so bad about the Supergirl statue besides her shirt being shorter than normal. Face it, Supergirl is hot... now get over it! :P