I've been waiting to mention this, just in case anyone out there was (a) reading the Buffy Season 8 comics and (b) hadn't gotten to this week's issue yet. But now that the New York Times has done a story on it, I guess we're out of the spoiler zone.

So yeah, here's the deal: Buffy banged one of her slayerettes. 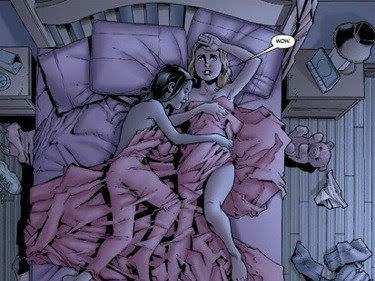 Except that I just don't know that they (meaning Whedon and writer Drew Goddard) earned it. The choice feels a bit off. I don't think it's exploitive, but it does feel a bit sensational. Left a vaguely metallic taste in my mouth.

A quick end-note: Whedon says that Buffy isn't gay, just that she's experimenting. Good for her! Except that one of the things the writers had done nicely over time was grow Buffy to the point where she was world-weary soul aged far beyond her years. She didn't have time for juvenelia of any sort. She was Batman--scowling and laying down the law and being sort of annoyed at her peers who weren't as dead-serious. All of sudden she's doing sorority-house sex play? Like I said, this character evolution just doesn't feel earned.

All of that said, Goddard gets in enough funny in the ensuing four pages to nearly justify the entire thing.

There's a longer interview with Whedon here where he unveils the rest of the writing line-up for the series, which is pretty much a comic-geek dream team: Jane Espenson, Drew Greenburg, Doug Petrie, Steve DeKnight, Jim Krueger, and then Brad Meltzer.

Doesn't get much better than that.
Posted by Jonathan V. Last at 8:54 AM

That's exactly what's wrong with Whedon AND Buffy during it's last few seasons.

1. Exploitative sex that "shocks." Whedon's probably threatened with cancellation unless he makes reader targets so he's doing the equivalent of smutty fan fic. Seriously. Puts Willow's "gay now" in perspective. It was all about Lesbian kisses getting ratings.

2. The writers he's got listed are eternal adolescents. Espenson and Noxon admitted they peed in Fury's jar of pretzels on his desk. What are they, 8?

MOST if not all of Buffy's themes were immature. That's fine for a 17 year old immature girl with superpowers. It's pathetic for a woman past 21 who ought to learn from not repeat past mistakes.

Presumably after her first vampire lover started killing people, and her second raped her, Buffy would have figured out that violent, dangerous, immortal vampires are poor choices. That body counts and cruelty do not enhance stability in a relationship and that the character of her potential lover mattered. That her beauty and sex appeal had both limited range and shelf life, and chaotic emotionalism and desire for roller-coaster romance are the choice of immature adolescents. Not mature individuals trying to accomplish something, anything, other than simply FEELING.

If anything the whole Buffy comic books are a refusal Peter-Pan like to grow up. The most interesting things about Buffy would be Buffy in her thirties:

1. Slower reflexes mean she can't fight vampires any more, as she did when she was younger.
2. In her thirties, ageless vampires prefer younger, 16 year old slayers to her fading beauty.
3. Decent, attractive men her own age are either married or unwilling to put up with nonsense, including a fairly sordid sexual history (rife with violent abuse that she chose herself) and a lack of skills or interest outside male vamps, icky/violent/dangerous friends, and danger and violence following her everywhere.
4. Her power repels most decent, attractive men because they understand that women choose men based primarily on power/social status "extras" over their own, and only a tiny amount of men will have enough power (money, social status, etc.) to "better" her own. Buffy is a losing proposition for anyone but a famous actor or multi-millionaire who could have a younger, prettier woman with fewer sexual partners anyway.
5. Her dangerous life makes friendships with ordinary people very difficult, leaving her very lonely.

That puts Buffy in an interesting (and realistic, read any article in the NYT from professional women in their thirties bemoaning this dynamic) reversal of fortune from her teen years.

It's adult because it comes to limits: of power, attractiveness, the issues of loneliness, mortality, and so on.

Particularly if say a 34 year old Buffy would like nothing more than a husband and child and based on her own poor choices cannot have one. Facing the limits of fighting vampires the way say Brett Favre faced his limits in the NFL.

But like I said, that would require maturity and it's just beyond most people in Hollywood.

Um, wow. While I do see your point on the exploitative aspect of the whole thing, and the idea that the character is older now and needs to show some more maturity, I find a lot of parts of your comment incredibly misogynistic, and here's why:

Point #3: The idea that Buffy's sexual history will keep men away from her. Many of us had sex before we were married; some of us with more than one person (we're kind of sluts that way, I guess). Unfortunately, some of us have also been sexually assualted or abused. Luckily for us, there are a lot of men out there that don't view us as "damaged goods" because of it, and will still even have respect for us. I'm sorry about the sarcasm, but seriously, I don't see why her "sordid sexual history" will keep men from loving her.

Point #4: The idea that men won't love her because she's powerful, in more ways than one. I think you're doing women a disservice by basically implying that we're all golddiggers who get married because we want more money or power - not like Buffy needs anymore power. I also think you're doing men a major disservice by implying that they're so petty and insecure as to be threatened by a strong women. A lot of men are totally fine with women who are equals, or even women who are MORE powerful than them. Some men are even turned on by it.

And also, just generally, the idea that Buffy would necessarily WANT to settle down and get married/have kids, etc. Not all women want or need that, even in their thirties.

I do see what you're saying about the character needing to evolve and mature as she grows up, and about her facing a whole new set of issues as a grown-woman slayer, but I just feel like there are A LOT of issues with what you just put out there.

I am in my twenties and I am sort of just like her. I am mature when I need to be but I still have a side of me you would consider 'childish'. Thats what being in your twenties is all about! so she is horrible with relationships, who isn't? Not everyone finds their true love in kindergarden...

Remember in High School she couldn't exactly be the girl she was suppose to be. She had to fight and kill, things most adults in the USA NEVER have to do. That would make you a little less mature then the average adult if you were placed in her situation. She isn't the only Slayer now so she is free to go out and make the "mistakes" most of us made in college.

I loved the Willow as gay thing, but I'm not sure Buffy experimenting is a realistic storyline...Buffy tends to take her relationships very seriously, and at least WANTS to be in love with her lovers. The part of this that seemed semi-realistic to me was that gosh, she's surrounded by hot, powerful, 'connected' young women, and being 'connected' is something that she desperately desires. So maybe that's the answer. She's looking for connection, and this is the form it took.

I think this is just pure sexploitation. I was a fan of the show, I have them all on dvd too, but I find them unwatchable now. In the last few years my view of Joss Whedon has gone from "genius" to "a bit of a creep". When I look back at Buffy and also Firefly/Serenity, I can't think of one leading/side character who is a homosexual male, even the ones you think would be gay are straight, but there are lesbians ahoy in his work and to be honest I think its all there to tittilate a male audience. And I'm saying this as a straight male.

I'm done with the whole Buffyverse, I saw this weeks episode of Lost and to be honest they handled homosexuality in a far more intelligent and mature way than Whedon could ever achieve. They actually made gay people look, erm well like normal people, gosh wow.

I don't think they are stuck in some Peter Pan syndrome state. When I went to college I thought maturity was around the corner. Nope...never found it because 21 is the new 17.

Isn't it just part of Buffy's post-death craving of "I just want to feel."

She's probably willing to try anything once to see if she can regain something comparable to her former thrills.

I see it as a reasonable story line development.

I think it's quite clearly implied that Andrew is gay...

Can't agree that women choose only on the basis of power, etc. Sounds like you are transferring your own bad experience to all women. Most men aren't millionaires or powerful yet wind up with wonderful and they'll gladly admit and be grateful for it, often superior women who love them pretty faithfully unless/until they do something stupid. As for shock sex...Willow's lesbianism never "shocked" me, though it was sudden. The thing with Buffy sounds like a lonely young woman whose first lover has moved on and whose second is married and whose third and most tragic is presumably dead and as a passionate woman she needs to feel close to someone. Xander is not that person for many reasons, good and bad, and Giles is too much of a father figure. So why not a Slayer who shares some of her feelings of isolation?

Buffy could hardly hook up with a normal human lover, that would be an even riskier choice than vamps and likely to expose her to blackmail by her enemies. She's been well aware of that even as a teenager. To suggest she's immature in seeking a lover who can defend him/herself is I think, mistaken. Going back to Angel and William, they were after all, decent human beings and reasonably innocent victims...In William's case her relationship led to his reclaimation, not a bad outcome. She never encouraged his hopes until experience proved to her that his soul recovery was real and even then she was cautious. With Angel she accepted in the end that his desire to be a hero in his own right was the real block to their relationship, not Angelus. She has come to see that her power is nearly as much a curse as the vamp demon to Angel and William and that it may forever limit her in terms of any long-term relationships, at least with normal humans. Not because of some power and status issue, but simply because they would become easy targets.