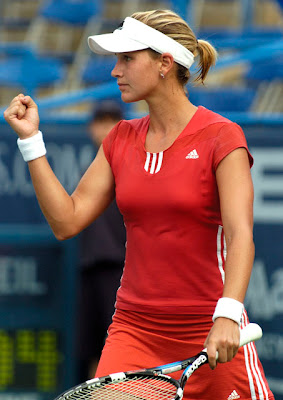 After being bounced from the tournament, the lovely Miss Harkleroad announced that she will appear in an upcoming issue of Playboy. Lots to discuss here, namely (1) How far down is Harkleroad on the list of WTA players you'd like to see in a gentleman's magazine? (I'd argue: not far.) (2) How many athletes have appeared in Playboy before? (Answer: Fewer than you might think.) and (3) How awesome is Harkleroad's motivation? While recovering from surgery, she said, "I was just laying there for three weeks, and, you know, an offer came to me. I thought, well, I'm not really doing anything right now . . ." An American hero.

In other notes, a commentator said today that Serena Williams is the only former champion in the women's draw. If true, that strikes me as a pretty rare sort of occurrence. Kind of interesting.
Posted by Jonathan V. Last at 10:22 AM