Steve Sailer has a long post taking issue with a Paul Krugman column from 1998. Without taking sides in the larger argument, Sailer links to this amazing story about how the financial crisis is hitting the Vegas strip:

There are more signs of just how much the Las Vegas Strip is hurting in this economic downturn. One of the valley's biggest casino companies, Boyd Gaming, saw a huge drop in profits, down 73-percent in the third quarter.

The company has also announced the delay of its signature resort, Echelon, will be much longer than anyone expected. The construction site will sit quiet until at least January of 2010.

The Echelon is the super-lux resort being built on the site of the old Stardust. The picture below is from August, when construction stopped: 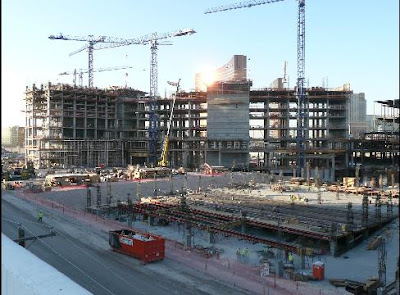 Just as a stark contrast between what boom and bust look like, Caesar's Palace Tower was built in something like 6 months with crews working around the clock. This entire casino site in a central location on the Strip is going to sit totally dormant for at least 17 months.
Posted by Jonathan V. Last at 2:31 PM