I have a short piece in the WSJ about how President Obama has overrun the comic book industry. Of particular interest is a bit of art which didn't fit on the page, the cover of the first issue of a new independent book, Barack the Barbarian: 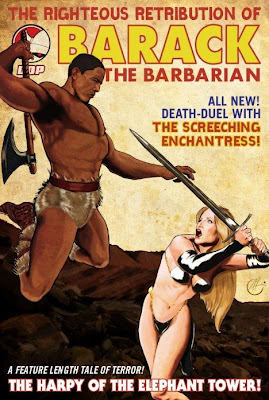 Of much more importance was the decision handed down on Wednesday by Judge Stephen "Dredd" Larson (who's a total IP stud) on the damages in the fight between the heirs of Jerry Siegel and DC Comics (meaning Time-Warner). (You can find the background on the original suit here. I had written it originally for the Philadelphia Inquirer, but my three years of columns for them have been disappeared from their archives.)

Anyway, the latest Larson decision is marginally a victory for Time-Warner because it limits the moneys the Siegel heirs are entitled to to simply profits from the Superman comic-book business. But the lawyer for the estate is making ominous noises about Superman's future with DC:

"To put this in further perspective, the entire accounting action pales in comparison to the fact that in 2013, the Siegels, along with the estate of Joe Shuster, will own the entire original copyright to Superman, and neither DC Comics nor Warner Bros. will be able to exploit any new Superman works without a license from the Siegels and Shusters."

At that point, we could conceivably see Superman imported to, say the Marvel universe. Which would cause spontaneous combustion among the continuity obsessives.
Posted by Jonathan V. Last at 8:37 AM

I couldn't find an email for you, and I wanted to make sure you saw the corrections I emailed WSJ on your generally fine Obama comics article.

To whom it may concern:

Your article "It's a Bird, It's a Plane, It's . . . Obama" (July 10) is quite interesting, but it contains a couple significant factual errors. Obama appearing in comics did not start is September 2008 in a biography comic book, as the article notes. Obama made an appearance in issue 4 of the series Licensable BearTM (the TM is part of the character name), published in July 2007 by About Comics. In the story, the title character offers then-primary-candidate Obama an endorsement, in exchange for money. This appearance was documented as his first known comic book appearance in Wizard magazine issue issue 213, page 28. I would be glad to provide a copy of this comic book for your verification.

Also, the claim that Reagan's appearances in comics were never important enough to be featured on the cover is false. In fact, there was a short-lived comic book series entitled Reagan's Raiders, published 1986-1987 by the no-longer-extant Solson Comics. All three issues feature Reagan on the cover, and in contrast with what your article said was the general depiction of previous presidents, he was shown as muscular and powerful, in superhero garb.

If there is any further help that I can provide to help correct this article, or any way that I can help you with information for future comics articles, please let me know.