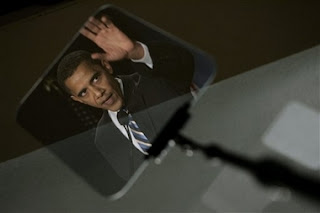 BREAKING NEWS: Senator Barack Obama has announced he is canceling his run for the White House after Senator Hillary Rodham Clinton expelled him into the Phantom Zone (above). His attempts to break free with his hand proved futile. Before disappearing into deep space, Senator Obama was heard yelling, "You have been known to disagree with the Senate before. Yours could become an important voice in the new order, second only to my own! I offer you a chance for greatness, Hillary, take it! Join us!... You will bow down before me, Hillary. I swear it, no matter that it takes an eternity! You will bow down before me! Both you and then one day your heirs!"
Posted by Victorino Matus at 3:25 PM

When I started reading that (well, the first couple words), I thought it was real breaking news that I missed -- right after MY ramblings on Obama...