It's a Good News/Bad News Situation

Ronnie Mars is dead. That's the bad news. The good, or at least promising, news is that the comic-book version of Buffy the Vampire Slayer: Season 8 has sold so well that DC has approached Rob Thomas about doing a comic version of Veronica Mars: Season 4. 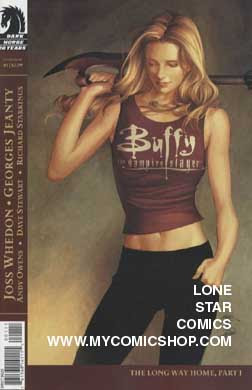 Which actually could be pretty great, seeing as how much fun the Buffy comics have been.
Posted by Jonathan V. Last at 6:43 AM

Your Buffy picture came from my comic shop. Literally. I used to live (figuratively) in the Irving, TX Lone Star Comics store.