Remember Allison Stokke? Of course you do. 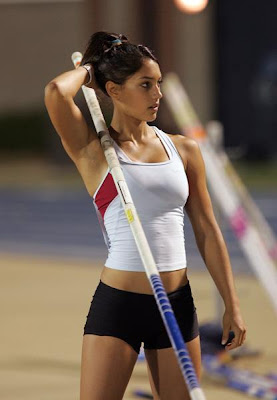 She recently vaulted to national fame when the Washington Post ran a front-page story on her pernicious internet celebrity. Here's a snippet from the piece:

Stokke read on message boards that dozens of anonymous strangers had turned her picture into the background image on their computers. She felt violated. It was like becoming the victim of a crime, Stokke said.

Stokke's family, including her father, Al, seemed to agree with her and be concerned about how terrible her new-found celebrity was.

With Leather gently hints at the irony here: Al Stokke is a noted defense attorney in Orange County and has tried a number of high-profile cases:

* In early 2007, Al Stokke represented a cop who pulled over a female motorist. During the course of the traffic stop, he somehow ejaculated onto her sweater. Said Stokke, "She got what she wanted. She's an overtly sexual person." Stokke won the case.

* In 2005/2006 Stokke represented a female teacher who was charged with molesting three of her male students, one of whom was 11 years old. "Where was she when I was 13?" Stokke asked the jury. Stokke lost that case.

Charming. But With Leather does not mention what is probably Stokke's best-known case, the Haidl gang rape. In 2002 three young men raped an unconscious minor. They videotaped the assault. Stokke represented the lead rapist, Gregory Haidl. Here's the OC Weekly's account:

Defense lawyer Al Stokke, who replaced lead trial attorney Joseph G. Cavallo, questioned any link between the rape and the victim’s claim of mental anguish. Stokke also mocked the girl’s physical injuries, finally conceding she was unconscious but then trying to use that against her. “There’s [no pain] that is felt,” he said, “because she was unconscious.”

Stokke "conceded" the girl's unconsciousness because the defense had originally insisted that she was just faking it.

This is the concerned father who was so upset by his 18-year-old daughter's picture being posted on the internet. Which is just like becoming the victim of a crime, right?
Posted by Jonathan V. Last at 7:24 AM

Seriously crappy, Last. Tagging the 18 year old kid with stuff her father did professionally (and over which she had no control)? Come on. You're better than that.

Hey, Anon #1? What post did you read? As far as I can tell, there's no "tagging the 18 year old kid" going on here. Let's see your cards. Where does JVL slag on Allison? Quote it.

The whole post is about what a dickhead Al Stokke is. Well, that and getting in a pun about "vault[ing]" into national fame.

Hey #2 -
The post takes a comment from the girl ("like becoming a victim of a crime") and then uses her dickhead father to slag her - in order to show some sort of hypocracy on her part that is not in evidence.
Yes, let's stipulate that her father is a jerk and there is a certain satisfaction that one gets in seeing him get the business, but, remember that it is coming at the expense of his daughter who appears to be an innocent in this.
Finally, let's see this happen to one of your kids and we'll see how understanding you are.

I think Mr. Last's point was to show the father's hypocrisy, not the daughter's. On the other hand I would not let hypocrisy get in the way of defending my children.

Look, I just don't see it. He uses Allison's comment, yes, but where does JVL "use[] her dickhead father to slag her"? At what point does Last actually, you know, slag her? That's what you accused him of, and that's what you haven't been able to show.

As for the cute remark about one of my kids, well, perhaps you're right. But perhaps, just maybe, you could extend some of that exquisitely tender solicitude towards the raped 15 year old girl? Since you're the big humanitarian and all.

I'm still confused as to what actually "happened" to her. Let's see...she's got a bunch of guys salivating over a picture of her on the Internet. Big deal. If that's "stalking," more than a few people are guilty of it.

The whole WP story was ridiculous. I don't feel bad for her at all.

The title of the post is "Meet the Stokkes"; it is not "Meet Al Stokke". Clearly the post is meant to impugn more than just Al Stokke.

That said, thanks for posting the picture again.

I feel a bit bad for her, one of the problems I think which happened with Lindsay Lohan is you had a bunch of guys shamelessly counting down to her 18th birthday. And she was somewhat prepared for that.

Allison Stokkes didn't really ask for this type of attention. But those private coaches are paid for by her father's job.

I'm still confused as to what actually "happened" to her. Let's see...she's got a bunch of guys salivating over a picture of her on the Internet. Big deal. If that's "stalking," more than a few people are guilty of it.

A) Let's say this is a girl who wants all the boys at her school to think she's hot. Even so, she doesn't want a bunch of strangers on the Internet deciding whether she's hot or not based on a photo taken out of context. That's creepy, and it's even creepier that she did nothing to seek out this attention and has no control over how far it spreads.