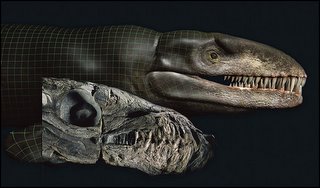 Scientists have discovered a 135 million-year-old skull belonging to a prehistoric ancestor of the crocodile off the coast of Argentina. According to National Geographic's Stefan Lovgren, "It had a head like a carnivorous dinosaur and a tail like a fish. With its massive jaws and serrated teeth, it preyed on other marine reptiles.... While other marine crocs fed on small fish, Dakosaurus hunted for marine reptiles and other large sea creatures, using its jagged teeth to bite and cut its prey."

(Illustration by DAMNFX/National Geographic 2005)
Posted by Victorino Matus at 10:40 PM