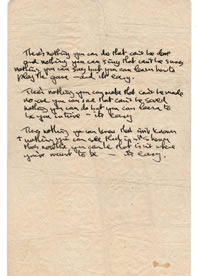 The above lyrics for "All You Need Is Love" were in the process of being sold off by music auctioneer Cooper Owen in London last night (no word yet on the final bidder). The Washington Post quotes that company's director, Ted Owen, who calls it "the Holy Grail of Beatles lyrics. It's probably one of the few remaining Beatles lyrics in private collectors' hands and one of the most important musical manuscripts in existence. It was the anthem of the peace movement ... the anthem of 1967."

Hey man, is that Freedom Rock? Well turn it up, dude!

And just like Freedom Rock, the lyrics for peace, love, and happiness do cost money. And not $19.95 plus shipping and handling, either. To be specific, the lyrics are estimated to be worth between $870,000 and $1 million.

And yet the part that bothers me is not so much the value (or overvalue), but rather Owen's statement that it is "the Holy Grail of Beatles lyrics." Personally, I'd rank them below the lyrics for "Eleanor Rigby" and "Things We Said Today" at the very least.

Besides that, there were much more interesting objects at auction last night. If I were a rich man (and kept my money in a big brown bag inside a zoo), I'd have spent it all on the Vox Continental organ Lennon played at Shea Stadium. (And if it actually works, I'd call over Billy Preston for a jam session, assuming Billy is still alive.)
Posted by Victorino Matus at 2:30 PM

Put on the Rutles:

It's like a bubble pops, and the Beatles "unilateral disarmament is peace" nonsense never impresses you again.

one of the most important musical manuscripts in existence.

Oh please! It is pop music for heaven's sake. Although I like the Beatles and rock music is fun to listen to, it is rather unimportant artistically.

Rock music will be virtually forgotten in another 100 years. I predict that in 100 years, one of the only places you will hear rock music from the 1960's - 1990's will be from movies that were made from the 1970's to today (assuming we will be able to view them because DVD's will be unreadable in 2105). You will also have oddballs who collect the stuff in their basements and show them on Antique Road Show on Gallatic Public Television.

show them on Antique Road Show

Ironic? How doe-eyed. Rock music sold out long ago. We've seen Roger Daltry and Alice Cooper host shows on the History Channel, and now the Rolling Stones have yet another tour--this one presented by Ameriquest Mortgage. Hopefully, that'll pick up the tab on the shreddin' saxophone solo during "Satisfaction," an anti-commercial song, I think. [I keep waiting for Taser to fund the next U2 tour.]

While I'm not into the whole 'authenticity' movement, that's why I like independents. At least by putting out their own music and having most if not all of the control over it, they're not open to the over-the-top hypocrisy. Not that anyone forced Mick and Keith to not put up their own money to tour the world at $150 a head.