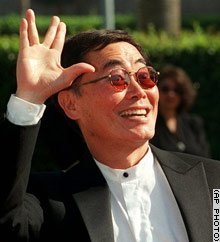 Much like everyone else at the moment, I can only express shock and astonishment at this late-breaking news. Who would have guessed Mr. Sulu is gay?

In the current issue of Frontiers, a bi-weekly (so to speak) gay and lesbian magazine, actor George Takei talks about his decision to come out. "The world has changed from when I was a young teen feeling ashamed for being gay," the 68-year-old Japanese-American was quoted as saying. "The issue of gay marriage is now a political issue. That would have been unthinkable when I was young."

Inspired by Mr. Sulu, Lieutenant Commander Worf, ambassador to Qo'NoS, also announced that he too is gay. Sadly, Commander Worf's announcement was interrupted when a mob of his fellow Klingons stormed the stage and proceeded to shred him limb from limb.
Posted by Victorino Matus at 12:27 PM

Sulu gay? Next thing you'll be telling me is that there are lesbians in the WNBA!

WTF is the world coming to?

His five-year mission: To explore strange new discos; To seek out new life in fabulous new hair salons; To bold go where Elton John has gone before!

Jim, I'm a doctor not a Fire-Island aficionado.
- Bones

Beam me up, Scotty. There's no club life here.

Captain, I'm not getting anything on the scanners. Perhaps Sulu could use his gaydar?

"Damn it, Jim, I'm an old country doctor, not a gender counselor!"

Remember Mr. Sulu's greatest episode on the original series? Most of the time he just drove the ship. But in the episode where everyone lost their inhibitions due to some disease or lame glowing special effect (I can't remember) what did Sulu do? He took off his shirt and ran around the ship with sword.

It all makes sense now.